Capture the Flag Center Flag-The object of the game is to capture the flag & take it back to the home base for your team. The flag is placed in the center of the playing field & the flag will alarm when it is moved.

Capture the Flag Team Base Flags-The object is to capture the flag from the opposing team & bring it back to your home base. Both teams start with an electronic flag- The game is over when one team has both flags at their home base.

Seek & Disarm- In Seek and Disarm, your objective is to ‘disarm’ the flag before the time runs out. The flag is disarmed by holding down the start and stop button until the flag declares you the winner.

The team that is starting with the flag may place the flag anywhere on their side of the field, as long as it is in plain view. (The flag supports both 5 & 15 minute game modes).

Zombies vs. Humans-   You are the last of the remaining humans not infected with the virus that has turned everyone else into a zombie.  If a zombie tags  a human, the human will then be unarmed & re-enter the playing field as a zombie.  At the end of the game, if there are any humans left, the humans win.

Freeplay: Everyone just runs around trying to tag the other team players. The last person standing wins! (One life is all you get).

Elimination-This game challenges two equal teams against each other. The game is won by completely eliminating all players of the opposing team.

Protect the VIP- Each team designates one team member to be their V.I.P. The team must protect and escort their V.I.P. from that teams base to the opposing team’s base without him  being eliminated/tagged. If the V.I.P. is gets tagged, the game is immediately over and the opposing team wins.

Rules for all games-
When players are tagged (the velcro dart will stick to the vest or jersey)-they are eliminated & sit out for 10 seconds. Players lose “lives” by being tagged by a dart tag dart. 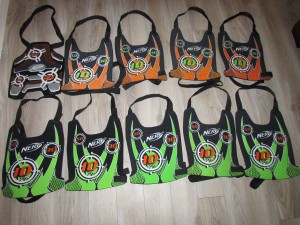 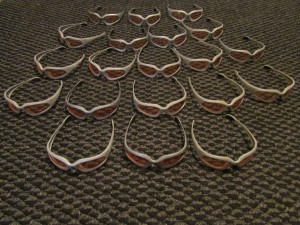